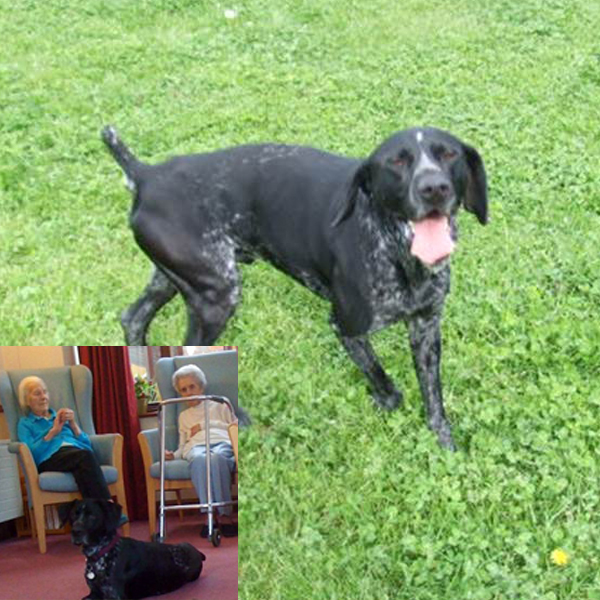 “I run a rescue for German Short Haired pointers, and we were asked to help with 6yr GSP who was living in an unsuitable environment as a companion for an elderly lady. We placed him in a foster home but he was completely manic in the house and literally would do a wall-of-death around the living room. He just couldn’t settle, so he was put in a crate – and that proved even worse, he wrecked 3 crates, and was still acting in a very manic way, despite the best efforts of his very experienced foster Mum.

The final straw came when he tried to dig his way out, and impaled his foot on one of the wire uprights and it was realised that something had to be done to help calm him.  Fortuitously, the foster Mum heard about Stress-Less.  She decided to try it immediately and administered a dose to this lovely lad, and then calmly put him in the crate, and sat down.  Within minutes he was fast asleep, and not only that, stayed there whilst she went out of the room to see what would happen.

She was amazed!  So it was decided to give him routinely.  Upon advice from Nupafeed, for the first two weeks the amount was at double the normal levels.  It was amazing.  He immediately became much calmer, with an improvement seen each day, until within two weeks he as back onto a normal maintenance dose, and able to be left for short periods in a crate (with other dogs for company).

We then put him up for rehoming, and he was quickly offered a lovely home. He was still a bit over-active, but went to his new home with a supply of Stress-less, and settled in well.  Within 6 weeks they had stopped administering Stress-less, and this lovely lad was showing what a normal happy young GSP he really was.

So I can honestly say that Stress-less saved this lad, as without it, it was hard to envisage him ever being able to go to a new home, so he would have been destined to live out his life in kennels or worse.

This boy has continued to enchant his adoptive family, and within 11 months of joining them was officially accepted as a PAT (Pets as Therapy) dog, has become a regular visitor to the local old people’s home – who would have thought it ……….

As a rescue, we routinely recommend Stress-less to those who adopt from us, as GSPs are a sensitive breed, and it is not uncommon for them to suffer from severe Separation Anxiety.  We have also used Stress-less routinely and very effectively for those dogs that react badly to fireworks or thunderstorms, or who get very worried about visiting the vet.  It makes such a difference to enable them to manage their fears.”

“After using Nupafeed MAH calmer with much success, I began to use Flex GLM for Bill, our oldest team horse who we sadly said goodbye to last year. Bill was competing at international level right up until his retirement at […]